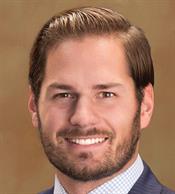 Hutchison & Steffen is pleased to announce that Robert T. Stewart has joined the Firm as an associate attorney. Stewart practices primarily in the areas of commercial and insurance defense litigation. “Robert is a great addition to the Firm,” says Firm co-founder and managing partner, John T. Steffen. “We see a great deal of promise in him, and we are sure that he will have a long and successful legal career.” A fifth-generation Nevadan, Stewart earned his law degree from the William S. Boyd School of Law at the University of Nevada, Las Vegas. Stewart served as an extern for Judge Lloyd D. George of the United States District Court for the District of Nevada. While in law school, Stewart served as an editor for the Nevada Law Journal, and published a law review article on the common law powers of the Nevada Attorney General.