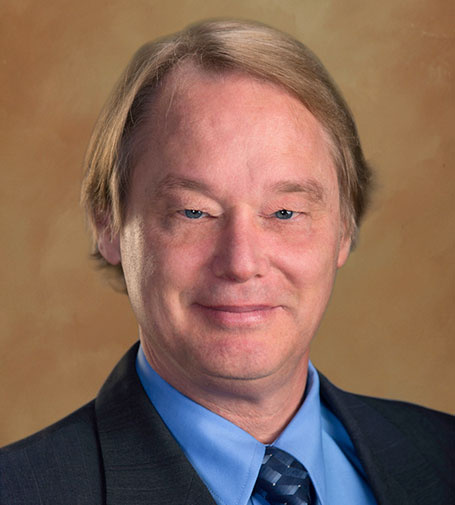 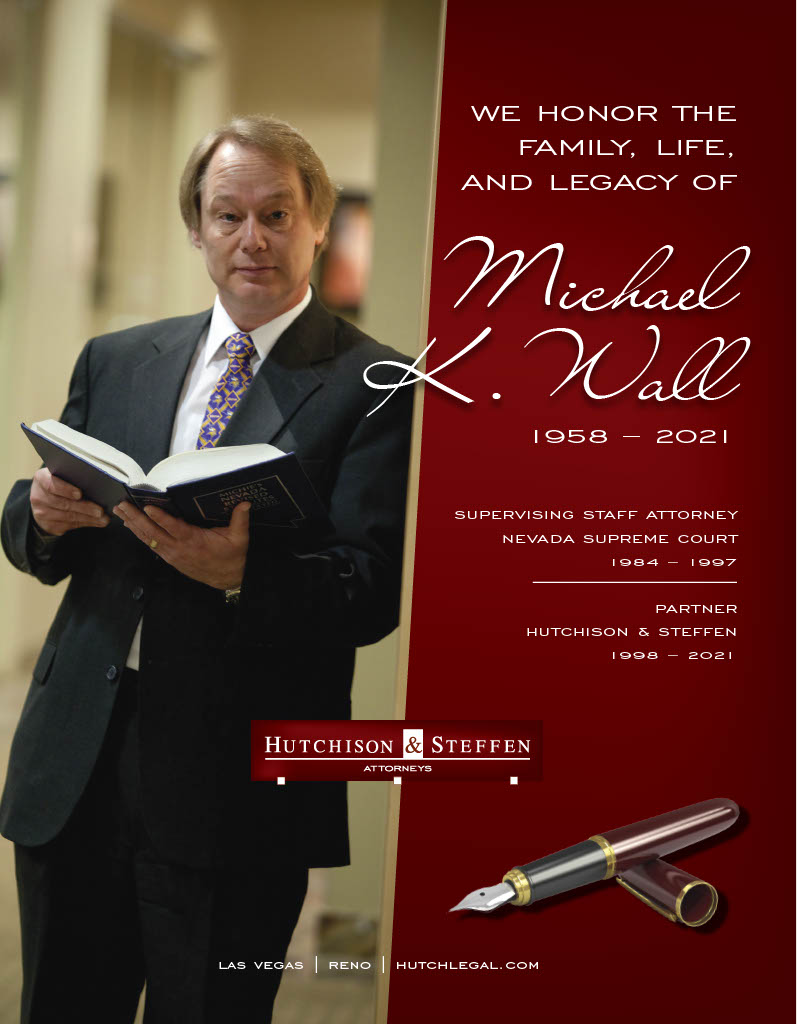 Before his passing in 2021, Michael K. Wall was a partner and an AV‑rated attorney by Martindale‑Hubbell®. He will always remain a significant part of the Firm’s legacy. Michael practiced primarily in the areas of appellate law, business and commercial litigation, landlord/tenant law, and insurance defense.

A native of Utah, Michael received his B.A. degree in English with a minor in German from the University of Utah in 1981, magna cum laude, and his Juris Doctorate degree from the University of Utah College of Law in 1984 (top 15% of his class). Michael was a semi‑finalist in the Roger Traynor Moot Court Competition, which earned him a position on the National Moot Court team. He was also selected as a William O. Leary Scholar six times (the maximum number possible). As a law clerk in the Tax and Business Regulation Division of the Utah Attorney General’s Office, Michael participated in the revision of Utah’s Sales and Use Tax Code.

After law school, Michael became a Nevadan. He was employed by the Nevada Supreme Court as a staff attorney for 13 years. After only eighteen months at the Court, he was promoted to the position of Deputy Supervising Staff Attorney, and he was later elevated to the position of Supervising Staff Attorney. He served as the Supervisor of the Court’s legal staff for eight years. While at the Court, Michael served as Chairman of the Committee on the Intermediate Appellate Court, and as a member of various other Supreme Court Committees. He participated as a lecturer and panel member in CLE seminars and spoke before numerous groups on the subject of appellate practice. Michael drafted more than a hundred legal Opinions for publication in the Nevada reports, and edited and otherwise participated in the drafting of hundreds more.

After leaving the court, Michael practiced law privately in Carson City before joining Hutchison & Steffen in 1998. He also continued his participation as a lecturer on appellate practice. Michael has presented numerous CLE’s and presentations on appellate practice to various groups, including Nevada Supreme Court Seminars, the NJA, the NTLA, and he has been a regular lecturer for NBI. He was a member of the Nevada Supreme Court’s Bench Bar Committee, which provides advice and recommendations to the Court. He served on various Supreme Court and District Court special committees and was involved in redrafting and studying multiple statutes and court rules. He was admitted to practice in both state and federal courts in Nevada and Utah.

Michael was married and had two children. In his free time, he enjoyed reading, dining, attending plays and the opera, the beach, and skiing, among other pastimes.

Mr. Wall had extensive litigation experience in state court and before arbitrators. He appeared before the Federal Tax Court, tried many bench and jury trials to conclusion in District Courts in Nevada and Utah, and argued on numerous occasions before the Nevada Supreme Court and the U.S. Ninth Circuit Court of Appeals. His cases included:

A defense award in the client’s favor and a finding of defamation in favor of the client on the counterclaim in a week‑long jury trial in an Americans with Disabilities and medical malpractice case in Kim adv. Morehouse, Case No. A403729 (Dept. 18, Las Vegas, Nev. 2001).

A reversal of a summary judgment and the adoption of a substantial change in the law of escrow agent duty in Mark Properties v. National Title, Case No. 32954 (Nevada Supreme Court, 1999).

Serving as lead appellate counsel and associate trial counsel in a case that ended in a 17‑week jury trial (after 10 years of litigation) against the State of California’s taxing authority involving numerous torts and resulting in a jury verdict in the client’s favor of over $138 million in compensatory damages and $250 million in punitive damages, one of the largest jury verdict awards to a single plaintiff in U.S. history. Before trial, the case went before the Nevada Supreme Court on petitions for writs twice, and before the United States Supreme Court once. Both Courts affirmed the client’s right to proceed to trial despite constitutional defenses asserted by the taxing authority. Hyatt v. Franchise Tax Board, Case No. A382999 (Dept. 9, Las Vegas, Nev. 2008). The case is now pending before the Nevada Supreme Court on appeal.

Obtaining a decision issuing a writ of mandamus in a case involving the application of the 5-year rule of NRCP 41(e), declaring that rule to be jurisdictional, which made substantial new law. Cox v. Eighth Judicial Dist. Court, Nev. ,193 P.3d 530 (2008).

Obtaining reversal of a district court order in an automobile accident involving a claim of medical malpractice. This case made substantial new law in Nevada concerning statutes of limitation in contribution and indemnity cases. Saylor v. Arcotta, Nev., 225 P.3d 1276 (2010).

In addition, Mr. Wall participated in numerous arbitrations on behalf of insurance carriers and their insureds and had limited the damages in those cases, and tried dozens of cases in Justice Court.

Mr. Wall was regularly consulted for his experience in appellate litigation in various matters.